Give me your number and get a unique micro-noise piece

Making beyond the Wall: get to know chinese makers 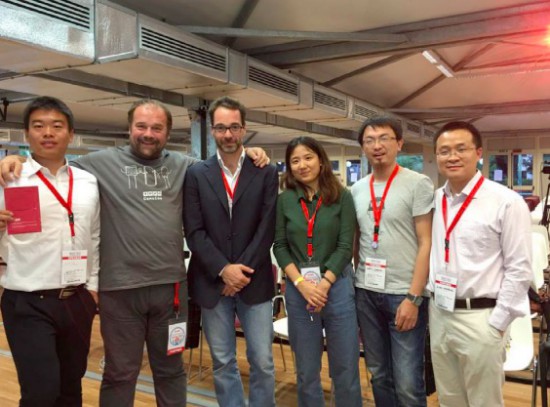 Last June Arduino partnered with Seeedstudio to manufacture Genuino boards for the chinese market and during Maker Faire Rome Massimo Banzi took part to an interesting panel to promote  4 chinese delegates from business, education, design and research domains presenting their work and discussing what does it mean to be a maker in China. (in the pic from left to right, Lin, Massimo, Alessio, Jin, Chenille & Flamingo).

The panel titled Making beyond the Wall and moderated by Alessio Jacona tried to address the growing maker movement in China which is not so visible to the European community while the hype of manufacture in Shenzhen, the Chinese Silicon Valley, is gaining more and more international media attention.

Flamingo was the first presenter of the session. Indeed he was also the first person to use Arduino boards in China back in 2007. As an evangelist, he taught physical interactions in China Central Academy of Fine Arts and even started the digital firm K1ND Beijing with Ogilvy China, which focus on interactive design with open source technologies for business projects.

He introduced LightBot (watch video on youku) made in collaboration with Jun Huang, an architect based in China. It’s an installation using LEDs as a brush to draw on light-sensitive canvas. The material on the wall glows after being exposed to light, particularly ultraviolet light, and fades away after some time. Lightbox is powered by an Arduino controlling 1024 LED lights installed on the pallet and stepper motors to control the movement.

Then it was the turn for  Jin  introducing Minibuilder and Candy Project (we featured her work in our blog earlier) created during her fellowship at Iaac. With her international background, Jin explained how she realized how the culture of making in China is focusing more on hardware startups with strong potential to accelerate thanks to great manufacturing opportunities. Whereas in the West, people see it more as a hobby or prefer to explore the conceptual development in a lab environment.  Nowadays she is implementing a new VR projects in China.

Later Lin explained his work as a tutor at the University of Science and Technology in Beijing and also his commitment as a community manager of mechanics and robotics in arduino.cn forum, the community of Arduino fans who also participated to Arduino Day. He worked on various projects and applied Arduino in hemiplegia rehabilitation equipment through sensor feedback and in a gearbox to detect malfunctions through vibration, temperature and stress.

Last but not least, Chenille talked about how he wrote the first book about Arduino in China and more recently, translated the third edition of Getting started with Arduino book into Chinese. He’s now working on a brainwave-controlled music player.

The panel was a good chance to present to an european crowd real experiences from the voice of chinese makers and sharing good practices for future collaborations.

Are you based in China and  want to share a project made with an Arduino or Genuino board? Submit it to the blog, we’d like to feature it and tell your story!