Rotate your laptop with this movement tracking system

Arduino at Salone del Mobile: Come and visit us in Milan! 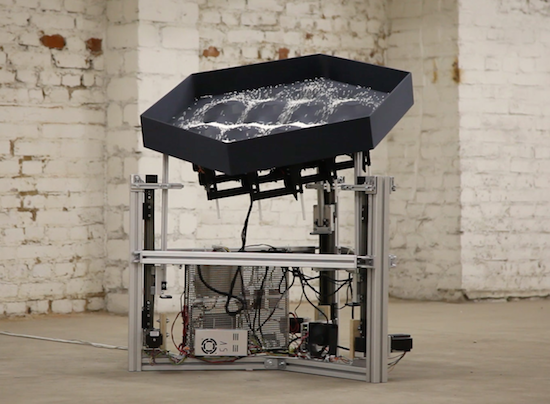 This Arduino-based project creates interesting tumbling patterns using a system that tilts a plane in a controlled manner while deforming its surface.

NEOANALOG, a “studio for hybrid things and spaces,” was commissioned to build the Particle Flow installation, which explores how granules tumble under the control of gravity. This mechanism takes the form of a large hexagon held in three corners by linkages pushed up and down by NEMA 24 stepper motors. As these rods are lifted, the granules inside the “arena” are steered over to the opposite side producing a zen-like experience. 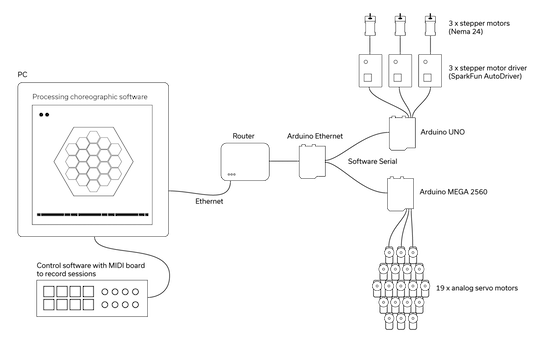 Inside the main hexagon are 19 smaller hexagons, each controlled by servos to lift an individual section of the rolling surface up and down. Control of the entire system is accomplished via a PC running Processing, which sends commands via Ethernet to an Arduino Mega and the steppers to an Arduino Uno with three motor drivers.

A moving slanted plane and a grid of motorized stamps control the elements to form infinite variations of behaviors and patterns. The result is a zen-like experience that is both: fascinating and contemplative. Software controlled motion follows a complex choreography and enables precise steering of physical particles in a variety of ways: from subtle to obvious, from slow to high paced, from random-like to symmetric.

Intrigued? Be sure to check out Creative Applications Network’s write-up on this piece as well as NEOANALOG’s page for more details.