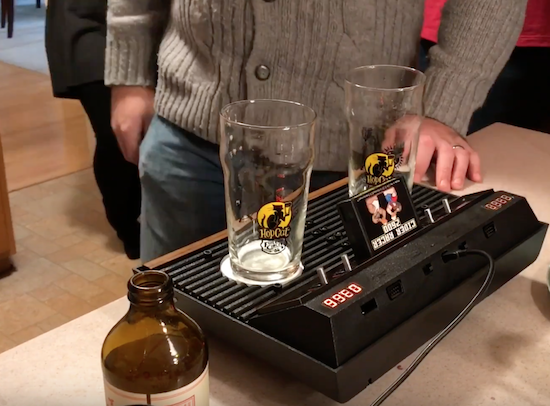 The next time you and your friends want to see who can chug beer (or a non-alcoholic beverage for the younger crowd) the fastest, you may want to try building your own Cider Racer 2600–an electronic racing platform and timer for competitive drinking.

Created by YouTuber “MonkeyBOX Entertainment” for an annual Christmas party, the project consists of a broken Atari 2600 retrofitted with an Arduino Mega, two 4-digit 7-segment displays, some LEDs, wires, and other miscellaneous parts. A pair of custom coasters were constructed using force-sensitive resistors, soft springs, rubber actuators, and three layers of CNC-cut materials: acrylic bottom plate, brushed aluminum center, and acrylic spacer to make it level with top of the old gaming console. 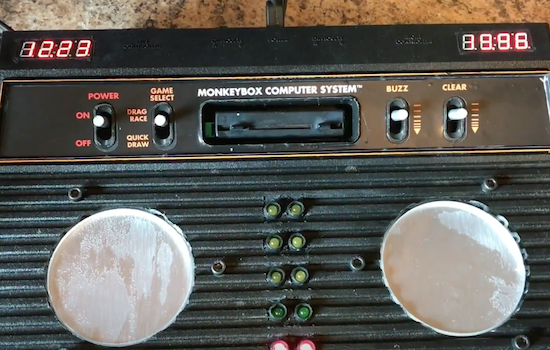 In drag race mode, two drinks are placed on the Cider Racer 2600’s pressure-sensing coasters. When ready to get things underway, both competitors press a red button on the side, prompting LEDs begin to countdown from red to green as if they were cars waiting at the starting line. Time is shown on a 7-segment display above each coaster, which stops as soon as someone puts down their empty glass. The winner’s time will then flash.

The clock can be cleared using the Atari’s old ‘game reset’ switch. But that’s not all. The Cider Racer 2600 is capable of detecting false starts and if a drink is placed back prematurely. You can read more about the project in the video’s description below, and check out its popular reddit thread here.