Inspired by a statement written on Woody Guthrie’s guitar, This Machine Kills Fascists (TMKF) is an Arduino Mega-based, guitar-playing robot that performs traditional American folk music on a portable stage. Sheet music with the song lyrics are printed and left on the benches set up in front of the stage, while audience members are encouraged to sing along to the tunes. 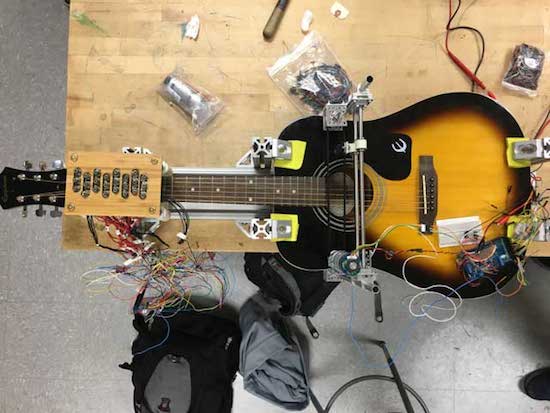 Our project is inherently positive and seeks to bring people together through music. It uses a strategy of generating empathy and goodwill with an artificial intelligence to make us ask questions of the kind of community we may or may not be making with actual humans. With TMKF we hope to create a compelling experience that starts conversations.

You can read more about TMKF here, and see an early test of the strumming robot below!