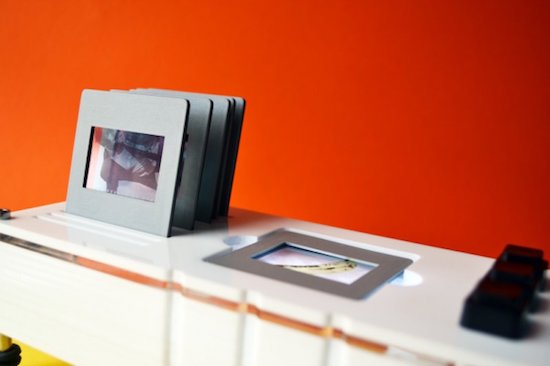 “I’m a big fan of digital music, especially Spotify. The ability to dial-up a much loved song I’ve not heard for ages or discover new music are just some of the benefits I never tire of,” writes UK-based designer Brendan Dawes. “Yet the lack of physicality to this digital medium has always left me wanting. I still own vinyl and a turntable and I love the ritual of physically flicking through what to place on the platter and then wait for the needle to drop on the spinning vinyl.”

To bridge the gap between the digital and analog worlds, Dawes decided to create what he calls the “Plastic Player.” The playful interface features a Raspberry Pi running Pi MusicBox connected to his 50-year-old B&O stereo, and an Arduino Yún with an NFC shield.

The “albums” themselves are made from a box of slide mounts with tiny NFC stickers on the back. When Dawes drops one in place, the Arduino identifies the tag, matches it to a specific record, turns on a backlight, and then communicates via WiFi with the Pi MusicBox API to play the tunes. 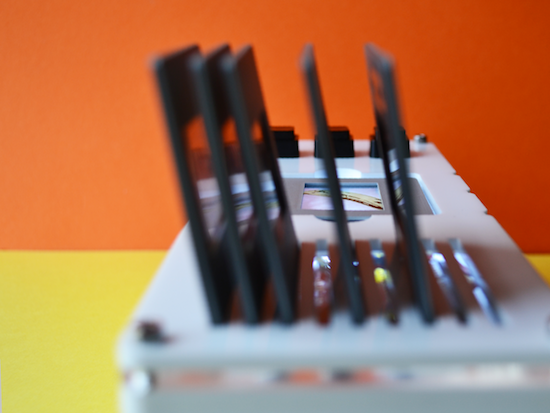 Removing the cartridge from the device pauses the track. But that’s not all. There are also three buttons on top, which can be used to skip, go back, or stop a song.

It’s often easy to romanticise the past, convincing ourselves that things were better back then when really I think that’s just not the case. I’ve discovered way more music since moving to Spotify then I ever did in record shops. What I do like though is the physicality of choosing an album to play and this system is an attempt to blend the good parts of both worlds. The future will continue to be digitised and I embrace that, but I think there’s a space in between the digital and the analog to create interactions that are filled with the inconvenience of what it is to be human.

You can read more about the Plastic Player on Dawes’ website, and see it in action below!

One Response to “Play digital music on this analog interface”