Lixie is a Nixie tube alternative

Meet the new MKRZero, the power of the Zero in a smaller board! 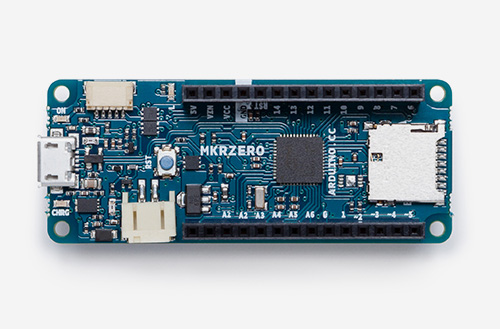 Say hello to the newest member of the Arduino family! The MKRZero–now available on our stores at the price of $21.90/€20.90 (+ tax)–shrinks the functionality of the Arduino Zero down into an Arduino MKR1000 form factor, making it a great educational tool for learning about 32-bit application development.

Like the Zero, the latest board is based on a Microchip SAM D21 ARM Cortex®-M0+ MCU. An integrated SD connector with dedicated SPI interfaces (SPI1) allows you to play with files without any extra hardware, while an analog converter enables you to monitor its battery voltage.

The MKRZero’s features in a nutshell:

Interested? You can explore the MKRZero in more detail, including its technical documentation, via the links below:

On the software side:

Watch out music makers, we’ve got some news for you! We have released two libraries for your enjoyment:

Join the discussion on the Arduino Forum!

11 Responses to “Meet the new MKRZero, the power of the Zero in a smaller board!”