RESTduino – Arduino Hacking For The REST Of Us 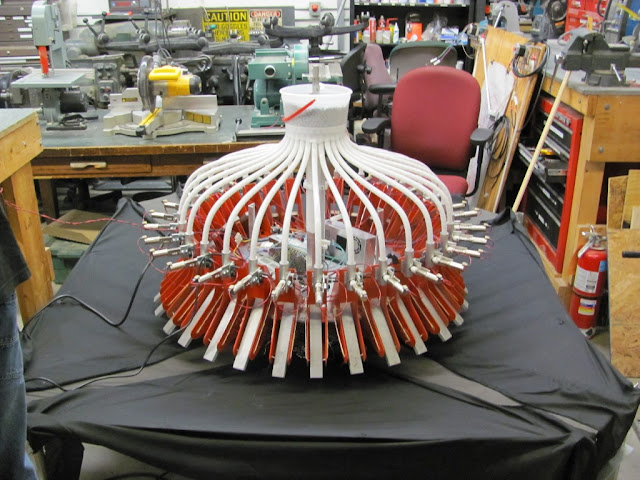 As part of the National Robotics Week coverage of iheartrobotics, the Vibratron:

[…]the newest member of the RobOrchestra. This amazing musician was built by club members with a total budget of $1000. The Vibratron uses an Arduino Mega to control 30 individual solenoid gates which drop steel balls onto the vibration keys. Using the Arduino Mega they were able to avoid complications with multiplexing I/O lines. Notes are read in using a MIDI shield to receive standard MIDI signals from a sequencer or keyboard. The balls are recirculated using an Archimedes screw to raise them to the bucket at the top.

[Andrew Burks] the project leader from the CMU Robotics Club, offered to have the Vibratron perform musical compositions submitted from the internet.

Anyone who has a song they want us to play, a question about the group, or a suggestion for our next instrument, should contact roborchestra =at= roboticsclub.org

If you want to compose music for the Vibratron, there are only a few things you need to know:
It is set up to play MIDI notes 48-77.

Any MIDI files we get before May we will record the robot playing and post by mid-May.

via [iheartrobotics], thanks to Bill for the info!

One Response to “Vibratron Robot Plays Out Midi As Steel Balls”