Scare away unwanted guests with an eye-moving portrait 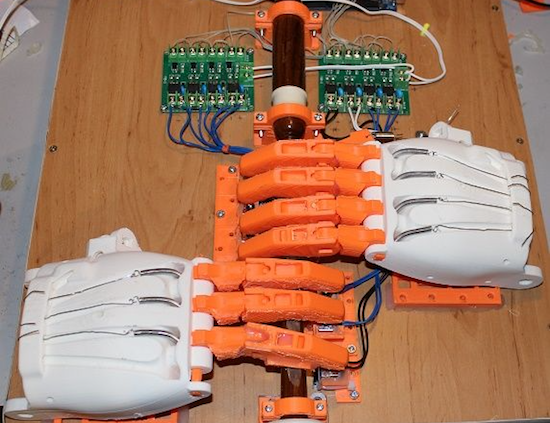 Using gigantic hands scaled up from a prosthetic design, “XenonJohn” can now hear the sweet sounds of Scotland whenever he wants.

Seeing this invention, you might note to yourself that most instrument-playing robots don’t actually bother to have realistic—if huge, at 171% normal print size—hands attached. Then again, you probably haven’t seen a robot configured to play the bagpipes.

The robot named Ardu McDuino plays the bagpipes, or rather the chanter part that is manipulated with one’s fingers, using actual prosthetic fingers to cover the holes. It also has a less-realistic “thumb” to cover a hole on the back.

Everything is controlled using an Arduino Mega via a bank of opto-isolated MOSFETs, along with solenoids to let it grip the individual air holes for music generation. You can read more about this project on its Instructables page!