Turn an old microscope into a live cell imaging device 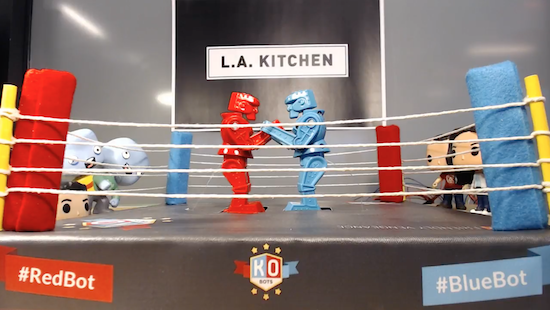 A pair of Rock ‘em Sock ‘em Robots are ingeniously employed for this charity boxing match, in which the action is entirely decided by Twitter. Participants tweet @KO_Bots with the hashtags #RedBot or #BlueBot to prompt the robot of that color to take a symbolic swing at issues including ageism, food waste and recidivism, then watch the impact of their post by following along in real-time online. 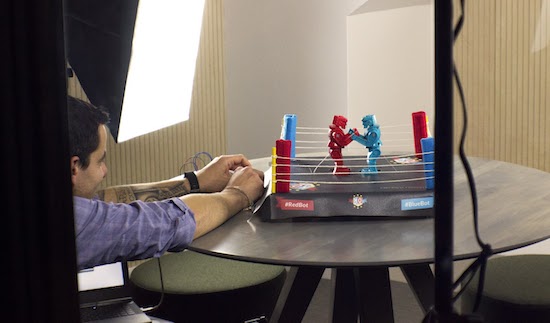 Punches are thrown using a set of servo motors connected to an Arduino Mega capable of reading simple inputs (such as a tweet) and generating an output (in this case, a punch). Friendly Vengeance CEO Steve Tiseo tell us:

To detect a popped up head, we attached a photoresistor below the chin and set a threshold for determining when the bot is “knocked out.” A Python script searches for #RedBot and #BlueBot, and then sends integers to the Arduino to randomize punches via USB serial communication. If a bot’s knocked out, it sends a number back to the Python script to tally a KO on the site.

After playing, users receive a thank you tweet and a link to make a donation. To learn more about the project and its cause, head over to the KO Bots page. The fight will be streaming from December 19 to December 23.