Make a cat feeder with Arduino, a servo and two cans

Open this Arduino trashcan by waving your hand

Your Arduino can tell you which countries you AREN’T in 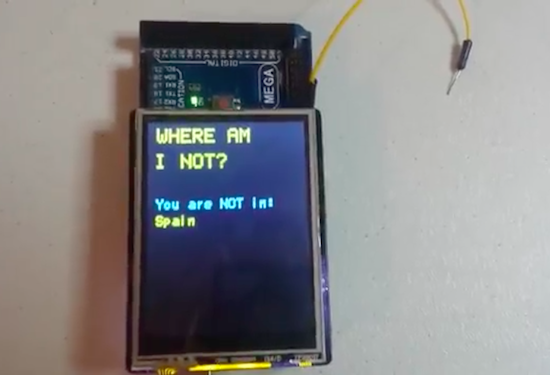 A few months ago, Connor Nishijima demonstrated a neat project highlighting the Arduino Uno’s “built-in motion sensor.” Now, he’s using the Arduino Mega’s “built-in anti-GPS” to guess which countries you’re NOT in.  How, you ask? By reading the frequency of the alternating current (AC) cycles in his house using an open analog pin.

You’ll need an Arduino Mega to fit the array of Strings below, Uno doesn’t cut it even with use of PROGMEM. The Sketch is also written to use the Seeed Studio TFT Shield, but if you remove all “TFT” lines from the sketch you can just see the output in the Serial Monitor. An antenna (just a breadboard jumper) on A7 might be necessary.

Since various locations have varying power systems, Nishijima was able to program the board with a list of all those that cycle the AC at 60Hz and 50Hz AC. By knowing which one you have, the Arduino can then reckon which countries you’re not in and display its findings on the TFT shield.

Perhaps the best part of Nishijima’s hilarious video, though, is what happens when you don’t have enough AC in your home. When this occurs, you’ll receive the following error message: “NO ******* CLUE WHERE YOU ARE. SORRY NOT SORRY PAY YOUR ELECTRIC BILL.”

Admittedly, he notes that this trick is “pretty useless, but fun, nonetheless.” You can find more about the anti-GPS project on GitHub.