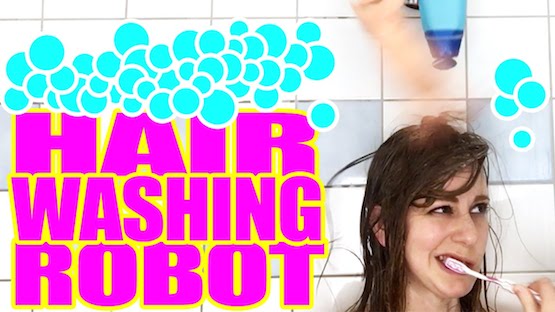 From getting out of bed to applying lipstick to eating breakfast, Simone Giertz has seemingly found every possible way to automate her morning routine. Next on that list? A hair-washing robot made up of a rubber hand, a bottle of shampoo and some basic electronics that allows her to lather, rinse and repeat, while leaving her hands free for other tasks like brushing her teeth.

Giertz’s latest project features Actobotics from Servocity, an Arduino Uno, a 6V battery pack, and a pair of Hitec servo motors — one to squeeze the bottle of shampoo, the other to move the rubber hand back and forth.

Although you’d probably never use this thing in an actual real shower, a shampoo robot is still pretty darn hilarious. See it in action below!