Make Batman dance at the rythm of a gas sensor 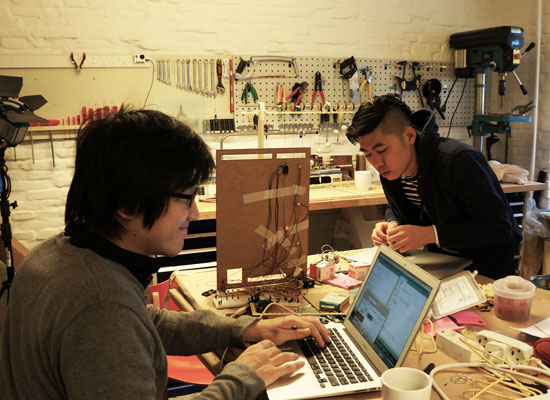 Every year the students of the Copenhagen Institute of Interaction Design (CIID) attend the Physical Computing class as part of their curriculum.

Having a small delegation of the Arduino team teaching this class has become quite a ritual. This past March Ubi De Feo, Alice Pintus, and Lorenzo Romagnoli runned the two-weeks-long intensive class.

Teaching at CIID is great experience, since you are surrounded by incredibly motivated and curious students, that are doing everything possible to design amazing projects and prototypes.

The topic of this year was prototyping interactive installations for a Science Center that would explain in a playful and engaging way how a technology works. For most of the students this was the first experience with physical computing, but even in such short time they were able to build eight different prototypes. The projects explain in an interactive way the science behind computer viruses, allergies, video compression, machine learning, laser printing, digital music synthesis, binary numbers and neuroprosthetic.

In Explaining laser printing Victoria Hammel, Chelsey Wickmark, Ciaràn Duffy, Feild Craddock demonstrate how the laser printer works. By using 16 servomotors connected to an Arduino UNO to move a matrix of magnets they were able to attract iron filings and draw letters on paper.

In Troyan 77 Karan Chaitanya Mudgal, Liliana Lambriev, Gunes Kantaroglu, Dhruv Saxena visualize the effects of a Trojan Virus harming your computer. Connecting Processing to Arduino they were able to create an overlay projection on top of the maze representative of the effect of the viruses on a computer.

Sound Blocks by John Ferreira, Alejandra Molina and Andreas Refsgaard is an musical instrument that explain how to compose sounds combining multiple soundwaves. The prototype was built using Arduino as a midi controller for Ableton.