Arduino at Salone del Mobile: Come and visit us in Milan!

Build a smartphone-controlled scoreboard with Arduino 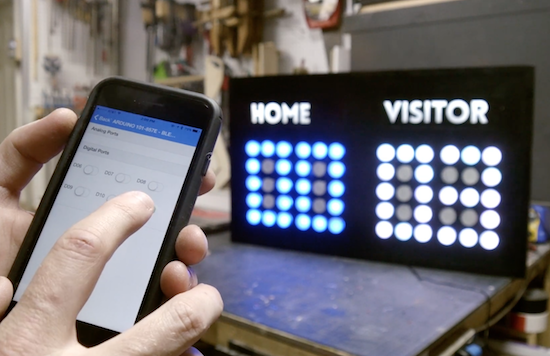 Using the Arduino 101’s built-in Bluetooth capability, Bob from the I Like to Make Stuff YouTube channel has crafted a beautiful, smartphone-controlled scoreboard.

If you’re into competitive sports, or perhaps want to settle who takes the trash out the most once and for all, an RGB scoreboard is a great solution. Perhaps it’s overkill in some cases, but Bob’s creation, which he expertly makes in the video here out of MDF looks amazing, and is large enough to be seen from a distance. It’s also small enough to be nominally portable.

His setup employs an RGB LED unit for each of the pixels that make up the score display, and uses an Arduino 101 as the brains of the device. Control is accomplished via a mobile app.

You can find Bob’s blurb on this project here, and the code for it on the project’s GitHub page. BLE 101, the app used for phone control, can be downloaded on iTunes.