A secret lair isn’t much fun if it’s a pain to get into, so Instructables user SPECTREcat decided to automate his hidden doors using an Arduino Uno. This drives four linear actuators via a MultiMoto shield, which both pull and turn the bookshelf in such a way that the books stay in place.

When opening, the doors first pull apart with one set of actuators, then turn with the other two to allow enough space for a person to pass through. Instead of drilling a hole through the maple plywood shelves, SPECTREcat chose to use a reed switch that’s activated on the other side by a magnet taped inside a DVD cover. 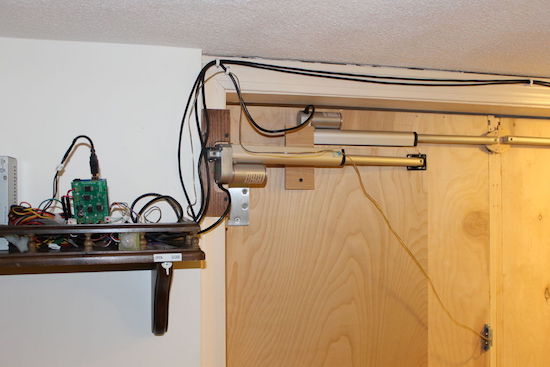 Beyond that, there’ s a PIR sensor that automatically closes the doors if motion isn’t detected for two hours. There’s also an emergency ingress/egress feature in the event of a power failure.

Looking for a hidden bookcase of your own? You can find more on the project’s electronics here, and see how the doors were constructed mechanically in this separate write-up.

One Response to “Bookcase automatically opens to reveal secret lair”