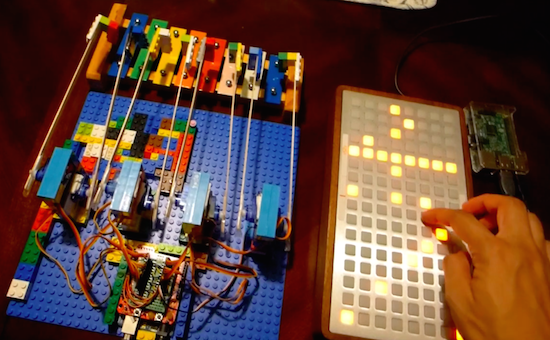 Created by “modulogeek,” the Monomepi Step Sequencer is a step sequencer that uses a Monome as an input controller and a toy glockenspiel as the output instrument.

The brain of the device is a Raspberry Pi 3, which runs a step sequencer program written in Python. Both the Monome interface and an Arduino Uno are connected to the Pi via USB. The Arduino controls eight servos, each attached to a “mallet” made of LEGO bricks taped onto coffee sticks.

As modulogeek explains, the Arduino is programmed to receive serial commands from the Python program. A command is one byte or 8 bits, each bit representing ‘on’ (play the note) and ‘off’ (do nothing) states of each servo.

The Monome is entirely controlled by the Python program, which sends serial commands that, for example, tell the interface which buttons need to light up or turn off. It also receives serial data from the Monome, like which buttons are getting pressed and depressed.

You can see it below, as well as check out its GitHub page here.