Check the time on a beautiful wooden word clock 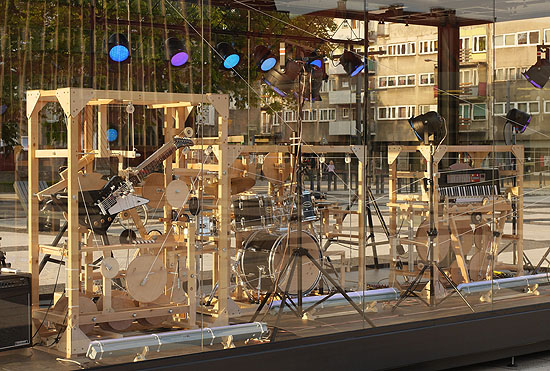 When you think of a music box, chances are that tiny trinket sitting atop your dresser or nightstand comes to mind. Well, that’s not the case with Niklas Roy. The artist has developed what he calls the Music Construction Machine–a super-sized music box that uses a giant hand crank to move various mechanisms inside, producing melodies and rhythmic patterns with an electric guitar, a keyboard, and a drum set.

The installation is housed inside a large transparent glass case, which enables visitors at the Goethe-Institut Pop Up Pavillion in Wroclaw, Poland to observe its inner mechanical workings as it performs. Although the hardware–consisting of ropes, pulleys, springs, levers, and weights—uses an algorithm to determine what’s being played, visitors still have a strong influence on the interpretation and expression of the sounds as they can decide how fast they crank and where they interrupt the flow of music. 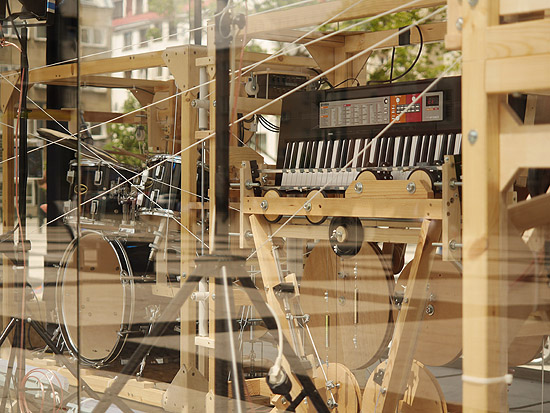 Unlike more conventional music boxes that repeat the same melody over and over, this machine has been designed to constantly create ever-changing beats and tones. In an interview with Deutsche Welle, Roy says that he was going for a sound that was somewhere between a “drunk punk band and an avant-garde trio.”

Although the mechanisms follow a simple inherent logic, which determines the sequence of tones that will be played, the overall behavior of the system is so complex that the sequence appears to be unpredictable for a listener. The result is a melody which is sometimes harmonic, sometimes not, but it definitely has a lot of variation.

In order to refrain from annoying the neighbors during the night, Roy is also using an Arduino Uno with a RTC to control the volume on the mixer via a servo.

Pretty cool, right? For those not in Wroclaw, you can see it in action below and read more about how it works here.