The Arduino GRANDE is six times larger than an Uno

While countless Makers love Arduino, none may love the boards as much as our friend John Edgar Park. In the spirit of Maker Faire Bay Area, we decided to take another look at what is surely the largest one we’ve ever come across. Introducing the “Arduino GRANDE.”

I love Arduino! But the boards are so tiny that they can be difficult to hug. And not so easy to see, either, if you’re a student sitting at the back of a classroom. So why not solve both problems by building a really huge, fully-functioning Arduino that’s six times larger than real life?

Bringing this fully-functional device to life required 3D modeling software, laser-cut acrylic, a few LEDs and buttons, some wiring and connectors, and a tiny (in comparison at least) Arduino Uno for a brain.

After making its initial debut several years ago, Park has now published a how-to tutorial of his project.

The first step I took in building this was to build a 3D model in Rhino. I based it on the Arduino Uno dimensions, and then started creating the parts based upon my real-world materials and scale. (Since I’m using an Epilog Zing 16 laser cutter with a bed size of 16″ x 12″, my maximum dimensions were dictated for me. So, this is actually a 5.6x larger-than-real-life Arduino.)

The chip is just for show, but the power jack will eventually hide the batteries, and the USB port will be made functional by the addition of a panel mount USB jack.

Insert the banana jacks into the female header blocks and then thread the nuts on to hold them in place. A dab of Loctite will prevent them from loosening up later.

On each banana jack, solder a length of wire sufficient to route through the board to the real Arduino. Push the wires through to the underside of the board at the header location, then insert and assemble the header blocks with screws and nuts which will be held captive in the acrylic t-slots.

The reset button (originally sold as a doorbell) needs to have two long lengths of wire soldered to it, which are then fed through the board to route to the real Arduino. The same goes for the panel mount rectangular LEDs.

Attach a real Arduino Uno to the board, and then run all of the header, reset, and LED wiring to it, and plug in the USB cable. You can use a ScrewShield to prevent wires from falling out. Full disclosure, I’m one of the creators of the ScrewShield and will make a little bit of money if you buy one.

Hide a 4xAAA battery pack inside the [cardboard] barrel plug, and then run it through a switch to GND and Vin on the Uno to power the Arduino GRANDE.

You can now upload a test sketch and try things out! I wired banana plugs to resistors, 10mm LEDs, potentiometers, speakers, buzzers, servo motors, and other typical components to plug into the GRANDE. 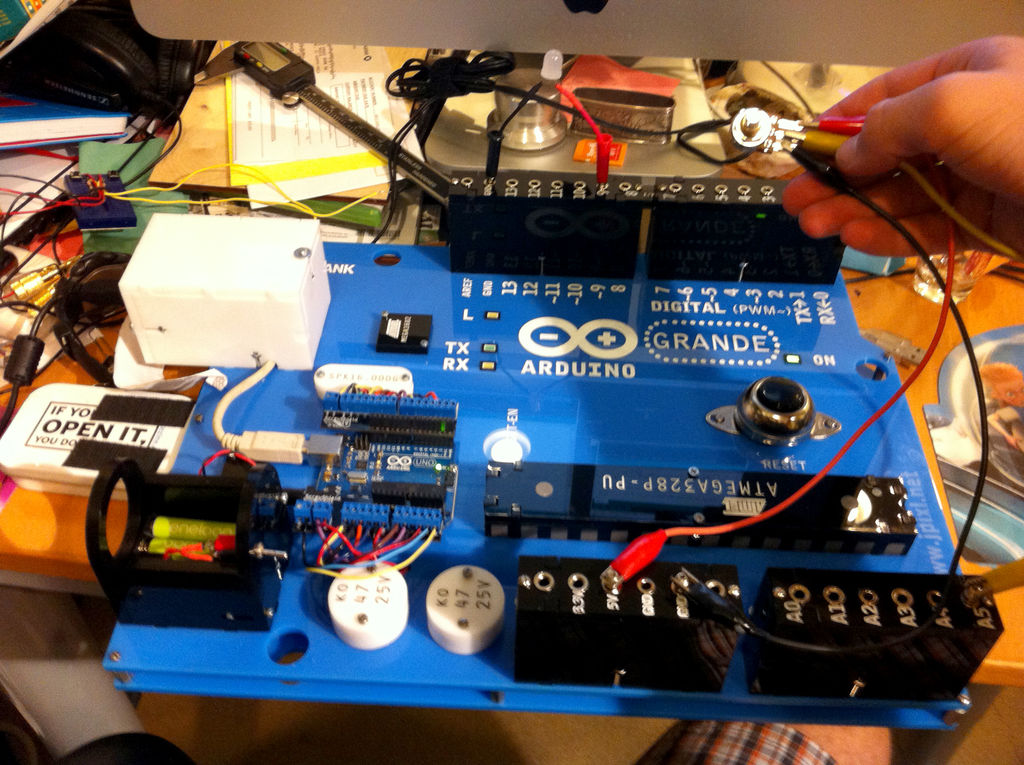 As for what the GRANDE’s applications, the possibilities are endless! It can be used as an an interactive, educational tool for Arduino classes, carried around like a boombox playing chiptunes, or even expanded upon with GRANDE scale shields! You can check out the entire project on Instructables.