An experimental game with a conductive rubber band controller

Watch the Toa Mata Band perform a cover of Kraftwerk 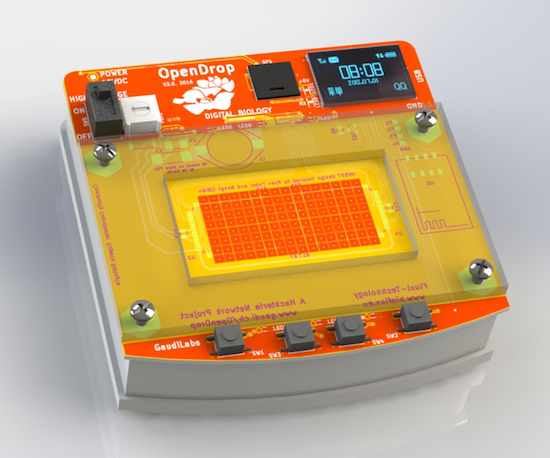 OpenDrop V2 is an updated design for an open-source digital microfludics platform, which was initiated by GaudiLabs in Luzern, Switzerland and developed in collaboration with several communities including hackteria | open source biological art, BioFlux and digi.bio. The device is part of a much larger ecosystem focused around digital biology with hopes of making personal lab automation accessible to everyone.

OpenDrop runs on a technology called “electrowetting” to control small droplets of liquids across a special PCB covered with a hydrophobic film. Pads on the PCB are driven to high voltages to attract the droplets, so moving them is simply a matter of controlling which pads are charged.

Potential applications are not only limited to science, but the art, music, gaming and education fields as well. One such example is OpenDropper, an 8-bit video game. See it below!

Interested in learning more? You can read all about the open-source microfluidics platform here and find its files on GitHub.