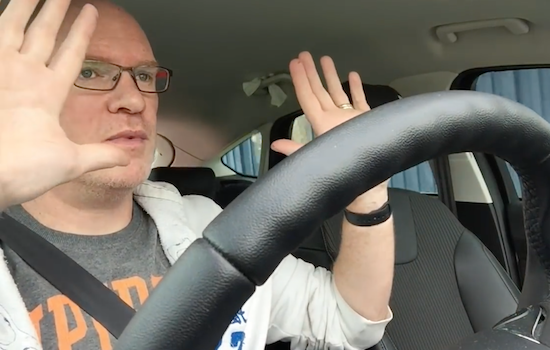 For less than $1,000, Keran McKenzie programmed his car to drive itself… or did he? That is the question, which has led to much debate online over the last couple of hours. (Although Hackaday has revealed the truth, it was one heck of an ad for Arduinos!)

Hoax aside, as hackers begin to see autonomous vehicles in various phases of testing, the question of “why can’t I do that?” is bound to come up. McKenzie seemingly attempted to do just that with an array of five cameras embedded in his 2012 Ford Focus where ultrasonic sensors were formerly mounted. While details of the project are slim (and now we know why), he does mention ‘using’ an Arduino for each camera, interfaced with a master board to put everything together. He also went on to ‘add’ a SparkFun MicroView inside the car for visual feedback of the supposed control system.

Impressive hacking/editing, however, as you see just after 3:00 in the video, trusting your life to a homemade vision system is probably not the greatest idea and is a build best left to professionals.

The Ford Focus that I have has an interesting feature, it has this home button on here. Now the home button doesn’t particularly do much other than tell the navigation system to turn on and show you the route home… It got me thining though, why can’t I push that button and have it take me home?

You can read the initial story about this DIY self-driving vehicle on IEEE Spectrum, and Hackaday’s follow-up here. So, we have to ask: Did you think it was real?

One Response to “A DIY autonomous Ford Focus… or is it?”