A cheap WiFi interface for Arduino

In this tutorial, Luca shows how to add WiFi connectivity to your Arduino boards without using a WiFi shield. Instead, he has combined a standard Ethernet shield with a commercial (and quite cheap) WiFi router:

I found the TL-WR702N nano router by TP-LINK that, with a cost of about 20€ on eBay, can work also as a wireless client: in this mode the router acts like a “bridge” between the device connected to its ethernet port and a Wi-fi network. 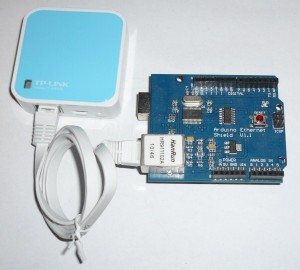 After a simple setup, where Luca configured the router as a WiFi client, the Arduino board has become accessible from the wireless network. Enjoy! 🙂

6 Responses to “A cheap WiFi interface for Arduino”