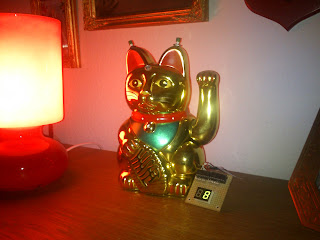 Rebuilt my lucky cat: whenever a page of my website is loaded, the cat will be waving its arm. There’s a light sensor so when its dark, the cats RGB-LED is changing the color instead of waving the arm. Changing the color of the LED is also possible with one of the buttons on the cats ears. The other one is the reset button. Used an arduino ethernet, a servo, two buttons, an RGB LED and two small yellow LEDs. The seven segment display is one that I harvested from an old stereo. It’s driven by the arduino and two shift registers. unfortunately I’ve soldered that one together for an older project, so that it doesn’t fit into the cat too. It shows the number of pageviews of the website.

via [instructables] visit the page of [Janwil]