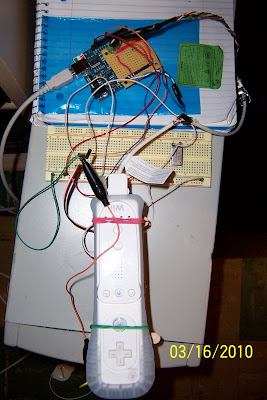 Everybody is familiar with the infamous Wiimote. When I look at it, I think about all the useful sensors/gadgets that this little 40$ package (new) comes with. Recently I’ve been playing with the IR Camera (It’s really just a light sensing camera with an IR Filter).This particular camera is a standalone module that outputs coordinates of the 4 brightest “images”, all via I2C communication.

I’ve only seen hacks with the Wiimote cam where the camera is desoldered/removed from the Wiimote. However, at 40$ a pop that seemed like a waste of a perfectly good Wiimote. Instead of removing the cam, I only made 1 small modification, which was drilling a very tiny hole near the camera and soldering a connection to it’s “Clock” pin (which needs to be a 24MHz sine wave to replace the internal oscillator). Once you have this done, all you need to do is plug a cord into the Wiimote peripheral port to use anything on its I2C bus.
Moving on, I attached the Wiimote on a homemade stand that was fixed onto a continuous-rotation servo motor (servo without feedback). Add a little duct tape, and that servo isn’t moving for at least an hour. 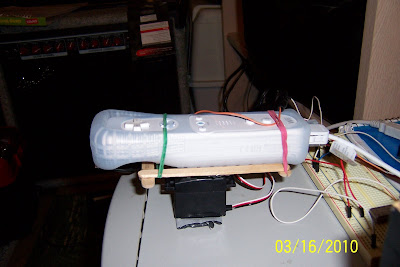 Using an IR Camera library already created (thanks to Hobley –http://www.stephenhobley.com/), I used an Arduino to receive points from the camera and follow the 1st object (light source) that’s noticed.

code can be found here.

4 Responses to “Wiimote light-follower with servo”